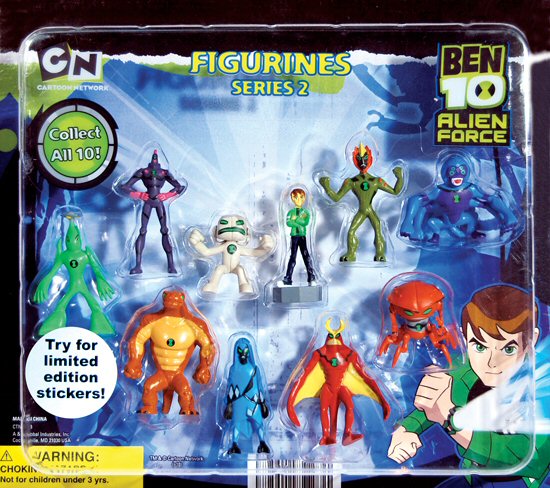 The ever popular Cartoon Network’s Ben 10: Alien Force is an original American animated sequel to the television series Ben 10. Set five years after the original series it takes a darker tone with more complex plots, less humor, and more characters dying. However Ben continues to help others along with a group of alien heroes using his unique powers along with his mischievous ways.

Since 2008 this science fiction action thriller has been a television series, in books and comics, plus toys, and video games.  Now the adventure series comes to vending machines with the Ben 10 Series 2 w/Stickers Vending Capsules.

The 250 count boxes of capsules have either 24 limited edition stickers or one of 10 figurines like Ben, Brainstorm, Goop, Jetray, Spidermonkey, and others. These 2 inch capsules come ready to vend in machines with 2 inch wheels. The capsules vend for either 50 or 75 cents and are sure to be a must for fans of every age. Candymachines.com also offers a display card for a small cost.