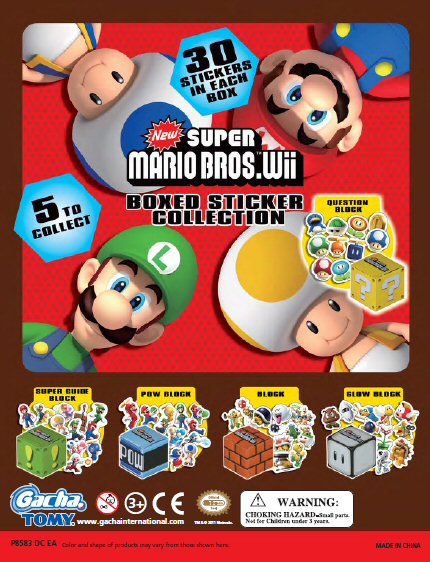 Nintendo’s greatest video game characters are now available to put in your vending machines. Super Mario, along with his brother Luigi, and his outrageous side kicks Mushroom, Goomba, Troopa and Cheep Cheep, come in boxes like the Question Block and the Super Guide Block as part of the new Super Mario Sticker Boxes Vending Capsules.

Super Mario and his buddies have been defeating enemies and capturing the imagination of children since 1985, with their latest release out in November of 2011. And you can be sure that their popularity is continuing to grow.

You get these capsules pre-filled and they vend for $1.00 in machines with a 2” vending wheel. Each of the five different boxes hold 30 stickers, and each case contains 200 capsules. The capsules are designed to vend in Tomy Gacha toy vending machines, and candymachines.com includes free, a display that goes inside the globe. The official licensed stickers are created in Japan by well known Gashapon artist Tomy Yujin (now known as Takara Tomy A.R.T.S.)